see Jackson's CALENDAR OF EVENTS near the bottom of the page 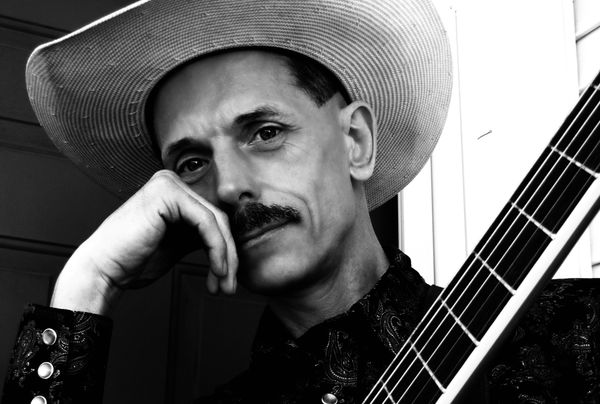 NOTE: Country singer / songwriter Jackson Mackenzie is available for appearances in Alberta with North American Fiddle Champion Calvin Vollrath and his band. Call 780.260.0222 to book them in your community.
Jackson can be contacted at jac.mackenzie.show@gmail.com or by phone at (780) 260-0222. 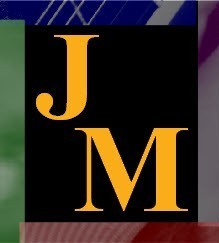 Original CD - Dance Me To The Moon 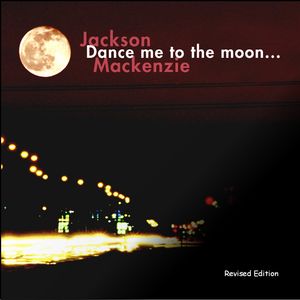 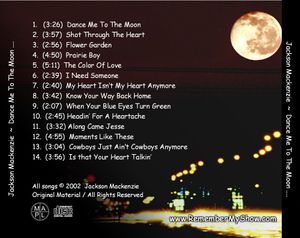 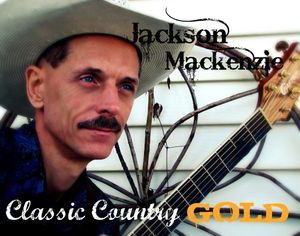 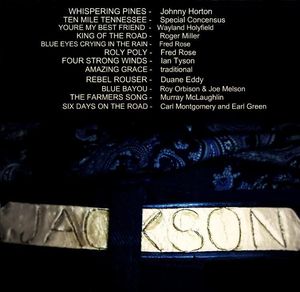 Born in Matsqui, British Columbia, Canada, Jackson was the second of four children. Raised in the ‘Cariboo’ country of central B.C. during his early years, he was well acquainted with the Williams Lake Stampede. While collecting empty beer bottles around the rodeo grounds he would hear the sounds of guest artists as they sang their country songs from the stampede stage. Jackson was hooked on the cowboy style and the music that went with it.

Although his exposure in those early years was limited to his parents’ LP of Evan Kemp & The Trail Riders, and a few gospel albums such as Jim Reeves’ “I’ll Fly Away” and Hank Snow’s “Gloryland March”, everything ‘country’ appealed to Jackson. He liked cowboy boots and Stetsons, nickel-plated belt buckles and horses. His family, however, was neither ‘well off’ nor particularly ‘country’, so most of what he loved remained as dreams. When his family moved to central Alberta, he felt his country surroundings had been left behind.

Then, at the age of twelve, living in Red Deer, AB, he bought his first vinyl LP – “A Country Boy Looks Down That Lonesome Road”. Today he can still sing most of those old tunes by heart – songs like “Six Days On The Road”, “Saginaw Michigan” and “King Of The Road”. Although he had no idea who Dave Dudley, Lefty Frizzel or Roger Miller were, he was in love with the music.

Fast forward to 1998. Jackson was confined to home after surgery on a broken knee cap. He says his life has never been the same – and all for the better! He explains why. “While sitting around, virtually immobile, I dragged out an old guitar I had never learned to play, and started singing to my own sorry chording. It would have been painful to hear – but who was listening? However, I had plenty of time on my hands – time to practice and time to think. Then I remembered a promise made, a debt unpaid. Years back, while recovering in hospital from a serious illness, I had thanked the doctor for saving my life. The doctor suggested that I show my appreciation by singing for the local seniors’ home when I was well enough. I readily agreed, but just as quickly forgot all about it. Now, while recovering from my knee injury, I decided to make a small attempt at appeasing my conscience by extending a kindness. I called the Youville Care Centre in St. Albert, (I was living in Edmonton at the time) and volunteered to sing for anyone who was unable to get out and about. I was invited to sing to a room full of Alzheimer’s patients before dinner. Arriving on crutches, I sat on a stool and sang and played. After about thirty minutes I ran out of material, so I started over.” In his words, it was anything but a kindness. “I proved to be neither a singer nor a player.” To confirm his assessment, he says, the Youville never invited him back for two years!

Here’s the good news. “Before I had any idea how poorly I had performed, I had already booked myself to sing at numerous other extended care and seniors’ facilities.” In time, his repertoire and his performance improved, and he became a regular and a favorite in many places. Although he still volunteered, most places began to pay him, so he decided to sponsor a third-world child through Children International.

After 2 ½ years of performing, Jackson was sponsoring 10 children, thanks to the kind donations of individuals and organizations that booked him.

Then he met Jessi Jo Charles and things changed dramatically. Jessi had that classic country sound and serious country music roots. Jackson and Jessi were soon singing duets and performing 15 to 20 times/month. They decided to record in 2001, releasing their first CD and cassette on October 29/01, called “Is That Your Heart Talkin’”, a collection of old favorites plus two cuts that Jackson wrote, including the title track. By early 2002 they were working on a second recording, and were sponsoring 24 children through 3 organizations, Children International, CHER Canada and Metro Ministries. Disadvantaged children had become their passion, country music their love.

A second CD/cassette, titled “Dance Me To The Moon”, consists of 14 songs written by Jackson. A country/bluegrass gospel & inspirational CD followed, called "Inspired", and in 2008 two more named "Country Stew" and "Country Stew, Too". Proceeds from these and event fees have, since 2007, annually sponsored 100 Ugandan orphans to attend school through a Canadian charity called F.A.C.E. (Free African Children through Education) and, in 2008, paid for a water well to be drilled in a Malawi , Africa village by the Stony Plain, Alberta charity "Water For Life In Africa".

Frequently played on CIHS Radio, Wetaskiwin, AB, where they first hit the airwaves, Jackson and Jessi’s music is available on numerous Canadian stations. They have also been heard on 23 southern U.S. stations from Florida to Texas affiliated with CIHS Radio.

Jackson continues to be available to you for events of all kinds and sizes. Jackson solos or he teams up with Jessi, friends Kayla Patrick, Bob Glidden, WayneO, the Command Sisters and Calvin Vollrath, who play and/or sing. He was a feature performer on the 2006 Alberta Men of Country Music show when singer/songwriter/actor Tom Jackson received the Lifetime Achievement Award. He and Jessi were again feature performers at the Alberta Men and Women of Country Music show in Hoadley, Alberta on May 9, 2009.

Jackson has since appeared with North American fiddle champion Calvin Vollrath and band, and continues to take bookings with them. 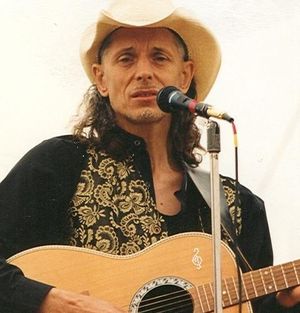 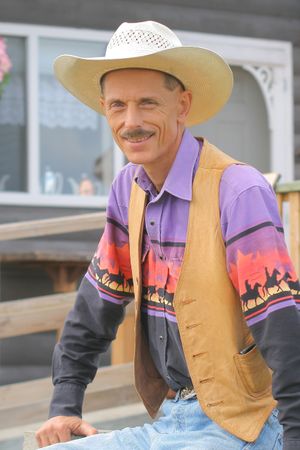 Dance Me To The Moon